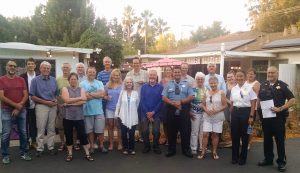 BAT #44 hosted their first National Night Out gathering in the backyard of BAT leaders Bettina and John Epp, with about 25 neighbors participating.

They were pleased to have Captain McCrossin and Officers Maloney and Malhi stop by to take questions and do a presentation on emergency preparedness, 911 procedures and to promote their Back-to-School supply drive.

It was a potluck with attendees bringing salads, beverages and desserts and they grilled burgers, veggie burgers and sausages. They had a great time chatting and getting to know each other a little bit better and reconnecting with longtime neighbors. They had two new families sign up to be members of the BAT that evening, one additional longtime resident, and a neighbor on the next street asked to join! 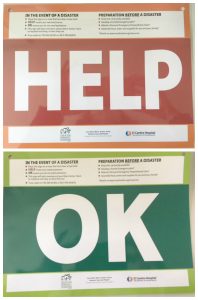 Co-BAT leaders Barbara and Kevin O’Reilly, Jim Beetem and wife Sarah and Suzanne O’Brien and husband Kevin supported and attended as well as nine other families.

Thanks to Barbara and Kevin O’Reilly, they had a official Green Town signs for proper recycling!

Bettina had a display of emergency backpack and pet pack on display and emergency preparedness flyers for guests to take home.

For those households that had previously signed up or signed up that evening, they handed out the Help/OK signs.