October 7 was “drill day” in Los Altos.  The school districts (high school and grade school) did earthquake drills – evacuating students and checking to make sure everyone was OK.  The City staff members went through four hours of formalized Emergency Operations Center (EOC) training and reviewing emergency procedures.  Not to be left out, the Los Altos PREPARE/BAT programs demonstrated how they can effectively communicate neighborhood status to the city without using phone lines, texts, internet or any other public utility, including power from PG&E. 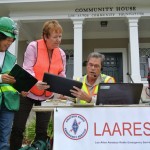 In the event of a widespread emergency, each Block Action Team (BAT) will do a survey of their neighborhood and fill out a Preliminary Safety Assessment (PSA) form that categorizes problems into the categories of people, structures and hazards.  This information is then moved to a local Emergency Information Reporting Site (EIRS) where the information is entered into a computer and sent to the City via amateur radio.  The picture here shows what a typical EIRS site might look like – an amateur radio operator (a “ham”) with a laptop connected to a radio and assisted by local CERT and BAT members.  The drill site chosen was the Los Altos Community Foundation center at 183 Hillview Ave, next to the Hillview Community Center and the Neutra House.

For the drill, Sherie Dodsworth filled in as a local BAT leader (pictured in the red vest) and Cookie Murata was our CERT member (green vest and hat).  Tom Armer (amateur call sign K6TAA) operated the packet station, entering information from the BAT person and transmitting the information to the City’s EOC.  While the total distance between the “EIRS” station and the City EOC was about 2 miles, those two miles may be impassible during a real emergency.  The total time it took to transmit the data to the city’s EOC was less than two minutes – a lot shorter than driving there on a good day.  For this test, information from three BATs was sent to the City’s EOC where the information was printed out and delivered to city officials.

The goal is to replicate this capability in each of the eleven zones that cover the city.  You can be part of this exciting plan to establish BATs and EIRS throughout the city.  For further information, send an email to info@losaltosbat.org, or consider signing up for a BAT Leader training class by following the link to the right of this page.