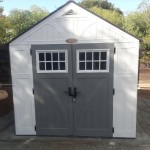 With the success of the CERT program in Los Altos, it was quickly apparent that a storage area was needed for general CERT supplies. Through a generous donation by Orchard Supply Hardware in Mountain View the shed became a reality. The only problem was that it was in pieces – lots of little pieces. Led by Harry Guy, an able team of volunteers met on Friday September 26th to put the pieces together. The first order of business was to level and compact the ground that the shed would rest on. A frame of 4×4 timbers was laid down and filled with just under two yards of base rock. The city loaned a compactor and the base rock was compacted and smoothed in place. From there the shed floor was put into place and the walls went up, followed by the roof. The timing was excellent because just as the last panel of the roof was being installed, the clouds opened up with a little bit of rain, probably as a last-minute check to see if the shed was water tight. And it was – everyone who was huddling in the shed to keep out of the rain stayed dry as a few team members frantically ran around outside trying to move their various tools out of the rain. Just as the last tool was stowed back into the trucks the rain stopped and the build crew celebrated a job well done. A big thank you to the build crew: Harry Guy, Jim Clark, Tom Freed, Lan Nguyen, Nick Tanner, Cookie Murata and Mike De Wein.